So I just came back from my weekend getaway to the city of Queretaro (Mexico), and I have to say that I am very pleasantly surprised with what I saw. Let me begin with the two main impressions that I took with me from this trip: Queretaro is a developed, modern, and prosperous city, not town; and its downtown makes it to my top two of historic districts that I have visited; it is just one position below Geneva´s, of course. I kept saying this while my boyfriend and I wandered around town, he agreed with me on the overall idea of what Queretaro looks like, but kept asking me what was it about its downtown that I liked so much. I guess it was not the tangible part of it, but more the energy of the place, what captured me.

When we first arrived Queretaro, we both agreed that the city had a United States-kind-of look/feeling and urban organization: big wide roads with little light and hotels, industry, and commercial building in each side of the road, to which we could get by taking one of the road exits along the way. At some point we could see the big parking plazas rounded by different brands names… yes, just like the many malls around the roads in the USA. We also saw the big logos of the typical American fast food chains, you know, McDonalds, Burger King, Carls Jr, Chuck E. Cheese… which really surprised me because I haven’t even seen them all in Mexico City.

But there are also local restaurants, which we were told are a must in Queretaro… BTW, before our trip, I read that Queretaro is the second best culinary city in Mexico, so I was very excited to try new restaurants in town. But I will get to that later.

Anyways, at this point, I was wondering where does a typical Mexican historic district fit in all this modernity!

The next day, we woke up early to go to our SEGWAY TOUR (yes, at this point in my life, I am all about new experiences, and since I have never ride one of this, I had to try it!), which was awesome. The tour guides took us to the most historically and culturally important places in downtown Queretaro, such as the Inquisition Houses, ¨Plaza de Armas¨, ¨Teatro de la República¨, ¨Plaza Fundadores¨, and ¨Casa de la Corregidora¨, each of which played an important role in the independence of Mexico.

Obviously, as every other downtown in this country, the walls were of all the different colors we can think of, nothing new there. However, different from others of its kind, most of the streets in this downtown were wide, which allowed more transit and gave it a bit of business vibe to the place. Every once in a while we would come across the narrow alleys with a little fountain in the middle, which I loved because they reminded me of my favorite magic town in Mexico so far, Guanajuato.

We went back when it was already dark, and it was bea-u-ti-ful, the lighting is perfectly well kept, which I think is so, so important so that the colonial architecture can be better admired (I wont name them, but there are beautiful cities of this kind that look creepy at night because of lack of lighting).

Back to the restaurants. There are many to choose from, but I want to mention two that I really liked: the first one is Hacienda la Laborcilla… I LOVED IT! The building is awesome, the decoration is beautiful, the live music is relaxing, and the food is very, very good. The second one is Di Vino, in the historic district… I am only going to say that I always choose pasta, no matter the option I want pasta, except when in this restaurant… I choose pizza… delicious! 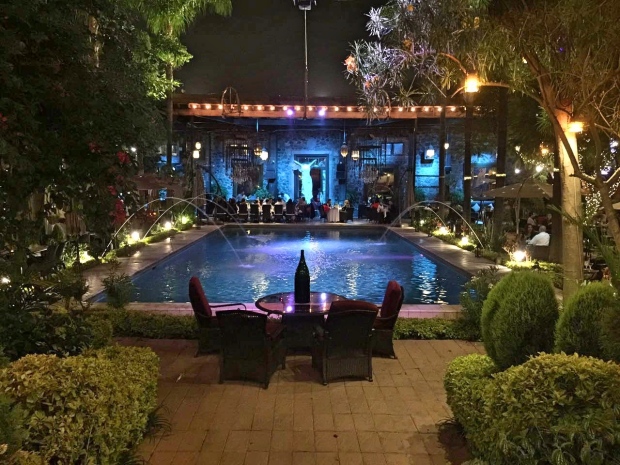 There are so many other things to do in Queretaro, which we couldn’t do due to lack of time and logistical issues. I plan to go back and do the Wine and Cheese tour and some outdoors activities, since there are plenty of options to do so in Queretaro.

One thought on “My trip to Queretaro, Mexico”

What I have been up to